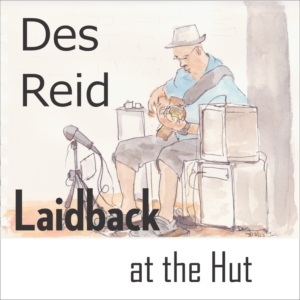 A relaxed album of pianistic tendencies on solo guitar & stomp box, mostly recorded live at the Loving Hut – a popular Brisbane vegan restaurant.
This is an ambient album of laid back tunes – gentle funk, lyrical compositions & improvisations
This is the album for after the afterparty, turn the lights down low.

Des’s solo show now includes live looping, beats & sometimes vocals, but this is mostly solo guitar with stomp box, live honest recordings. No arty shredding, just good tunes.
After the bluesy stomper of Seeya Later, it settles into a light rhythmic ambience
Easy to See is a slow version of another Step It Up tune. Usually played with a UK garage beat, but here it is laid well back.
Lazy Daze is a Step It Up ballad. Check the band out elsewhere, the other players are amazing.
Happy Dog is an Indian tune with shruti box.
Lucid is an early chillout composition.
Prelude is a bonus track on loop pedal & Ebow.
To Be Continued… takes a couple of (psychedelic) trips through the Space Echo